Vanakam and blessed day to all precious Atma,

According to the historical background, this Sivalingam Statue was brought there in early 1993 by a member of the Nachitram Family from Negeri Sembilan. A few years before that, he often visited the Panching Cave in Pahang( Panching is a small town which is located on the road from Kuantan to Sg. Lembing-an old tin underground mining town), where a Buddhist Temple was built nearly a hundred years ago. During one of his visit there, he met an Indian Sage in the cave who told him to bring a Siva Statue to install it there! He immediately took upon the idea and flew to India to buy the Sivalingam Statue. 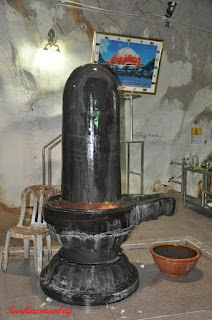 . When the Sivalingam Statue was brought in; it being 9 feet tall and weighing several tons was left at the foot of the hill for a while because there was no one who was willing to undertake to take it up to the cave leave alone to install it there! This gentleman then got hold of Dr Sethugavalar, an O&G Consultants in Kuantan and requested him to take it up and have it installed in the cave. Dr Sethugavalar, the President of the Jalalingam Temple, paid Rm20,000/- to a group of 25 Indonesian Workers in 1993 to haul the lingam up to the entrance of the cave which is more than 150 feet up. From there on, it had to be rolled into the cave for  distance of  another 100 meters for installation!
I came to know about this place through Dr Sethu who invited me to pay a visit to the temple in 2006. The path up to the temple was very steep with its twists and turns, making it very hazardous for any one to make the climb up to the cave. I have been there more than 10 times and on every visit, we would do a simple abhisegam for the Sivalingam with Water, Milk and Honey! At that time, I harboured the idea of making proper steps up to the Sivan Temple just like how the steps for Murugan Batu Caves were constructed! Furthermore, the Brahma Padam which is the lowest portion of the Sivalingam was broken and the Vishnu Padam/ Siva Padam above it were tilted and inclined to one side. It could topple over if a slight earthquake were to happen! So Dr Sethu, his committee members and I were contemplating of how to right the situation by making the Brahma Padam in Malaysia. In fact, a quarry in Negeri Sembilan did eventually cut a granite block which was brought to the foot of the hill but finally the Committee decided to import the black granite Brahma Padam from India. 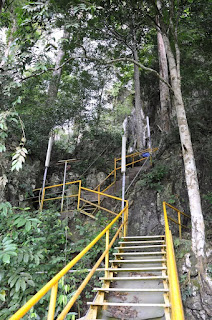 In 2007, I appealed to an old friend in Kuantan who was an ex-JKR officer, Mr Venudurai, to help build the steps up to the cave and he kindly agreed to contribute RM20,000/- for the purpose! He started survey work to find the easiest route to construct the staircase up to the Caves. At the same time, our Beloved Lord Shiva decided to land a helping hand. He appeared in a vision towards end of 2007 to Ir A. Sivabalan who was doing some work in Kedah. In this vision, he clearly saw a Sivalingam Statue up in cave atop a hill somewhere in Kuantan. He was amazed and puzzled with the vision but he decided to check it out. He asked several people about the whereabouts of the Sivan Temple in Kuantan but no one could give him an answer. One day, he asked Mr Venudurai whether there was indeed a Siva Temple in a Hill Cave in Kuantan! Mr Venudurai told him that there was no Siva Temple in Kuantan but there is one in Panching! This got Ir Sivabalan interested and he immediately decided to visit the location. When he finally visited the Buddhist Temple in Panching Cave, he knew this was the place that he saw in his Vision a few months ago.

2. Sumathi - 38 years - Home Maker
I will go back and see the Siva Peruman in the Cave. Great feeling.

3. Subramaniam Rengasamy - 72 years , Lawyer and Writer of the book Sivoham
It is a homely feeling and a rare experience to worship Sivalingam in a Cave . Email :subra2608@gmail.com

4. Sarah Santhi 38 - Lecture in a Private University
The journey to Panching Cave Sivan temple just an amazing experience. The trek up was little adventures but the moment i reach the temple ..am fully energized by the positive vibration. It's a beautiful and very peaceful feeling. The Sani pradosam prayers was the 1st prodosam fall on saturday for this year 2012. Thanks to Sivajnani Nagappan to take me closer to him . I am blessed. :). Email : sarahshamine@yahoo.com

5. Josephine - Kindergarden Teacher
im Josephine George and i would like to share my personal testimonial on the pancing lord shiva's temple.This temple is located in gua caras pancing kuantan.10 kms far from my house.im a born christian but i realy like lord shiva since im small i always admire hindus worship him.i learned his manthras and used to chant every day.i can consider him as my every ting in my life.well,i have no words to tell about lord shiva who is in pancing cave he is realy powerful.i always feel diffrent kind of feeling when ever im there.Its like i can feel the presence of lord shiva there.every one should come and experience this.OM ANBE SIVAM. Email : jogeorge89@yahoo.com

Vanakkam. As a devotee of Mahadeva, I am always in search of any information about Him in any medias available. I believe it is only His will that I stumbled upon a website, that too, a Malaysian website about spiritual matters. I always wanted to go on a pilgrimage, precisely India, but, I do believe God is omnipresent and we could have darshan of the Supreme even in Malaysia. As a matter of fact, I vowed to do abhishekam in Maran few months ago, and thisblogger was organizing a trip to Maran and Panching Sivan Temple...yes, His will indeed!

God works in many ways... I went together in a car to Maran and Panching with 4 other people. I met the organizer of the trip, Mr. Sivajnani, a wise Chinese uncle called Kannan, a spiritual soul-Madam Saraswati and a quiet man with a search for something- Mr. Siva. How God comes into this matter, one might ask? As  a Malaysian Indian, I am a novice when it comes to spirituality and religion. Only through His grace that I am able to learn just by observing these people and listening to their work and perspectives about religion and spirituality on the journey to the said destinations.

The organizer is a noble man, and he should be applauded for his noble intention creating awareness to our society about Hindusim. The Chinese uncle is the testimony that God is present in everyone, as He doesn't have a micron of prejudice and is fair to all, and this proves that God dwells in all man. This uncle knows almost all the Thirumurai and Thevaram by heart and I came into realization that there is so much more for me to learn in my quest to learn my own religion! Madam Saraswati braved the long journey and fleet of steps to climb the Panching Sivan temple, thus proving that when you have grit and determination, anything can be done, and Her one-pointed bhakti made her have darshans of both the Moolavars of the temples, without any problems due to her age. Mr. Siva, was a man of few words and it appeared to me, that he had some prayers to God, and what I liked was his his faith to come all the way to Maran and Paching.

The Maran temple is a majestic temple with a unique Lord Muruga. No one should miss to have a darshan of Lord Skanda here. One the other hand, the Panching Sivan temple is a unique and exotic temple I have ever been in Malaysia. Words cannot express my delight to see Mahadeva in His majestic presence there in Panching.

I must  like to say that this trip etched good memories and gave me a lot of insights on how to become a better Hindu. The journey with these noble souls was indeed a satsang. I just wish that may many other out there would benefit from such a trip in the future. May God bless us all.

Blessed Day and Blissful Life to all.

Artha Dharma
Artha Dharma Concept builders was established in 2006 by Sivajnani Nagappan with the vision to link individuals and organisations to share ancient wisdom, knowledge, and information based on our scriptures. We also promote and organize events, seminars, talks, and conferences related to religion, culture, spirituality, yoga, astrology, mind science, money science, health, and other subjects that will enhance the individuals appreciation and understanding of Hinduism and the world. www.arthadharma.net